Thiel, Bitcoin And The Trump Administration 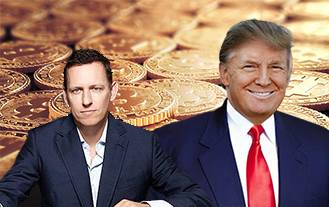 Lately many analysts have published a litany of opinion articles related to the role of Peter Thiel in the Trump transition team and how that will affect bitcoin prices. Some of the articles give readers interesting insights into what may happen. Others overestimate the role bitcoin may play in and after the Trump era. These scenarios – particularly the ones that Michael J Casey puts forth – are not necessarily based on a sound understanding of the architecture of international economics, or on the theoretical foundations that underpin monetary policy within the system of international commerce.

To understand how the future of bitcoin, blockchain and other cryptocurrencies will develop under the Trump administration, it is necessary to look at the players first. Many would say that Peter Thiel, a serial entrepreneur, PayPal co-founder, libertarian and bitcoin enthusiast, will probably encourage a positive attitude towards bitcoin within the Trump administration. Thiel, who will be a part of Trump’s transition team, will definitely have some influence over the administration’s policies. This doesn’t necessarily mean that bitcoin will benefit.

What Thiel can really do for President Trump

It is safe to assume that Thiel could well serve as a bridge between Silicon Valley and the Trump administration. Traditionally, high tech entrepreneurs back Democrats instead of Republicans. Democrats are perceivably more “tech-friendly” because of their stance on environmental policy, immigration, their position on international trade and the degree to which they are branded as the more tolerant political party. Thiel broke with the tradition and backed Trump, and he will help break the perception that Republicans are less tech friendly than Democrats.

Thiel might also help President Trump grapple with the disruptive nature of blockchain technology. FinTech is clearly one of Thiel’s greatest strengths; it also happens to be one of the most misunderstood technological disruptions in terms of policy and regulation. This doesn’t necessarily mean that bitcoin will rise to prominence due to Thiel’s influence, but blockchain might.

So what is the Bitcoin Story behind Trump’s Presidency?

In the meantime analysts have chosen to put bitcoin in the spotlight following the surprising election results. The price of bitcoin did rise after Trump won the election, and markets panicked in tandem. That spike was short lived, and bitcoin returned to the $700 USD area where it was before the election. Meanwhile the Dow Jones rose to record highs while the NASDAQ took a hit. Tech companies were among the biggest losers last week, while traditional industrial blue chips strengthened, along with the US Dollar.

This defies the view espoused by analysts like Michael J Casey, who thinks that Trump’s presidency will accelerate the demise of the US Dollar. Casey sees bitcoin having a more prominent role, while countries around the world, fed up with US dominance over the world economy, start selling their Dollar assets in favor of a decentralized currency as a tool for international trade. Casey ultimately paints a scenario in which decentralized currencies dominate international trade instead of fiat, and Trump is the catalyst behind the change – perhaps unwillingly.

Evidence to the Contrary

Casey bases his analysis on a narrow view of international economics and the national interests of some countries, which are not necessarily well founded in theory. Monetary policy, a cornerstone of his argument, is misinterpreted. Trump has indeed come out against Janet Yellen’s handling of interest rates, repeatedly stating that rates should go up. That is his view as a real estate developer, who probably knows by heart what the interest rates were at each point over the last 30 to 40 years. Many would agree that rates are too low indeed, and that is creating a lot of cheap money that will unnecessarily fuel inflation and risky loans. That means that if interest rates rise, some loan risks could subside, making the US Dollar a less risky asset to hold.

Casey also paints a picture in which investors will necessarily have to dump US Dollar assets because Trump’s meddling in Fed policy will be too unbearable. First of all, that is highly speculative. The Fed is independent from the government by law. Presidents are unlikely to coopt the Fed because they benefit from its independence. Part of the Fed’s mandate is to balance fiscal policy with monetary policy to keep the economy stable while the government implements its policy. Trump is likely to understand this better than many of his predecessors, and his laisses faire approach – along with that of his advisors, Thiel included – will keep him from trying to control the Fed.

The second and probably most crucial point that undermines Casey’s argument is the fact that a rising Fed rate will draw people away from the US Dollar and towards bitcoin and other world currencies. Investors are constantly looking for higher yields, and a higher interest rate will draw them in. If the Fed indeed raises interest rates – and it signaled that it will do so even before the election – capital will move into the US and not out. Money will also tend to move out of a non-interest yielding asset such as bitcoin, just because the US Dollar represents lower volatility and increasing yield. That could be one of the reasons why the price of bitcoin came down after markets digested Trump’s victory.

Decentralized Currencies Instead of Fiat

Another point that Casey makes is that countries around the world are dissatisfied with the current system in which the US Dollar is the reserve currency of choice. This could be true, but all these countries have options under the current system, and none of them really include bitcoin nor any other decentralized digital asset. Countries could well keep their reserves in Euros, Pounds, Chinese Yuan – the IMF recently added the Yuan as one of its reserve currencies – or even opt for gold or other precious metals.

Countries around the world have overwhelmingly chosen to keep their reserves in US Dollars because it is the most stable of all these currencies, the most widely accepted and, currently, probably the one that gives the best yields. Gold on the other hand, works a lot like bitcoin in that it is a non-interest yielding asset. Gold like bitcoin are assets that from an investor’s point of view are only worth holding in a low yield environment or when political/economic risk are too high. Regardless of Trump’s views on the interest rates, the Fed will probably increase them, and the sudden surge in the Dow Jones shows investors are not too worried about political or economic risk at this point in time. Hence investors just like sovereign countries, will be looking to hold more US Dollar denominated assets and less non-interest yielding assets.

Just as countries chose to hold reserves in US Dollars for convenience, they also chose to use the currency to settle debts between them when they trade. Russia and China for instance, don’t have to use the US Dollar to trade between them. They could very well use the Yuan, with its newfound IMF-approved international reserve currency status. The Yuan’s declining value due to the Chinese economy landing and the slowdown in international commerce, make the US Dollar more attractive. The fact that China holds so much of the currency itself, also means that buying goods from Russia using the Greenback makes sense.

In any case, there is no doubt that no matter how prominent the US Dollar is in Sino-Russian trade, both countries are in full control of their monetary policies. Having the US Dollar as a reserve currency does not mean that countries have given up monetary freedom. The degree to which each central bank can set interest rates and regulate money supply is the most prominent measure of that nation’s monetary policy freedom. The Euro zone is a good example of countries giving up monetary freedom. That model does not represent neither the Chinese nor the Russian monetary models. The only point that Casey could make to show China has lost monetary freedom, is the Yuan’s peg to the US Dollar and the fact that the currency does not float freely. That is one of Trump’s grievances, and it is also a situation that China got itself into by choice.

Casey’s chosen examples – Russia and China – also shed a light on attitudes towards decentralized currencies in international commerce. It is true that in theory the world would benefit from decentralized currencies such as bitcoin insofar as trade is concerned. There is no doubt that transfers through these blockchain powered systems would be much quicker and much more efficient – especially if trading parties integrate smart contracts. Sovereign nations nevertheless, are much less enthusiastic about giving up control over their own currencies. China and Russia are especially skeptical about this.

Bitcoin is currently outlawed in Russia – although there is more leniency now than in the past. China also outlawed bitcoin until 2 or 3 years ago. Both countries have instead taken blockchain technology up for further research. We might even get to see a blockchain-powered Ruble and a blockchain-powered Yuan before any group of nations attempt to use decentralized currency as a tool to conduct trade.

Back to Thiel, Bitcoin and Trump

In this sense the US under Trump wouldn’t be much different. If anything, Thiel could potentially suggest putting the US Dollar on blockchain, but it is unlikely that bitcoin will enjoy large and sustained gains solely due to the economic and technological policies of the Trump Administration. Quite on the contrary, in a world with a higher degree of protectionism like the one Trump talks about – and no one knows if he will actually implement – investors will look to buy US Dollar denominated assets and probably gold. Using bitcoin to trade in a world in which trade is restricted, makes no sense.

The US is still the biggest, most robust economy in the world, in which investors have the greatest access to investment products. Nations and decentralized currencies will not be able to dethrone the Dollar in the near future regardless of what president elect Trump does. Thiel’s role will be crucial, and he understands the value in free trade. If Thiel is able to shape policy in favor of bitcoin regulation in order to allay investor fears about the currency that will be a boon for bitcoin. If Thiel also manages to influence policy in favor of free trade, Silicon Valley will benefit as will the rest of the world economy. In the meantime bitcoin will mainly serve as a hedging tool for those who do not have access to alternatives, but not as an instrument that will play a role in replacing the US Dollar in international trade.