Interview With Adam Rizvi And Andrew Wagner Of Coinfest 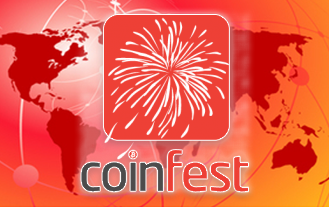 Coinfest is one of the largest – if not the largest – gatherings of bitcoin and cryptocurrency enthusiasts in the world. It started in 2013 in Vancouver Canada, at the Waves Coffee House with a gathering of 100 enthusiasts. It was so successful that the Café later put the first bitcoin ATM in the world there, but the popularity of this event was just starting to electrify crowds beyond the cold white north. Soon, Coinfest had volunteers and enthusiasts throwing their own gatherings on the same day in Europe and Latin America. In light of the coming 5th Coinfest gathering world-wide, we interviewed Andrew Wagner, the founder of the Coinfest movement, and his colleague Adam Rizvi.

Bitcoin Chaser: What was the inspiration behind Coinfest and how did all the organizers come up with the idea?

Andrew Wagner: I originally started Coinfest as a way to incentivize and promote cryptocurrency adoption, hence it being held at venues which accept it. Merchant adoption was how I got into Bitcoin. I also was less well-connected in the industry back then, and wanted a convention that would be more accessible to the masses. In its structure, I wanted it to be as decentralized as possible. So, it had to be open source and enable anyone who follows its protocol to become an official organizer. As smart contract technology advances, my role as a central authority will be gradually reduced. We’ve already gone multisig, but I still control the main website, and Adam Rizvi hosts the forum

BC: Given the recent arrest of 4 bitcoin miners in Venezuela, what do you expect to happen with Coinfest in that country, especially given the fact that last year 3 different cities hosted the event within the country?

AR: I think Andrew would be best to answer this. I do think the event should still be planned – big or small the community should get together.

AW: Coinfest’s departure from Venezuela actually has nothing to do with their inflation crisis… we simply lack volunteer/organizational support there, now. We held Coinfest events in Russia back when their government was clamping down, and will continue to be neutral towards local political situations, just like Bitcoin. They’re not going to hunt down the Coinfest wallet multi-signatories all over the world

BC: How can Coinfest help miners and other members of the bitcoin community in places like Venezuela, and elsewhere in the world where authorities seem to be singling them out?

AR: By working together, sharing ideas and knowledge.  Events can be large or small but getting the community together and helping each other is important.

BC: How can Coinfest become an event that promotes diversity, in the sense of currency choices and opinions about the world economy?

AR: I think Coinfest is already an event which promotes diversity, I myself don’t stick to one particular project to promote as I love to see the depth of projects out there, so reach out to all different communities. As you will see with Coinfest UK the speakers and attendees are traveling from all over the world sharing their ideas from their perspective on cryptocurrencies with have a very diverse set up.

BC: How did you come into contact with bitcoin the first time and why did you become involved with it?

AR: I was researching uses for my redundant GPU machines I had after a contract in the security industry ended. I found the Bitcoin community and the members using GPUs to mine Bitcoin and thus I put my equipment to use.

BC: You are also involved with Crypto Gallery. How did you get into the crypto-art scene?

AR: I have followed the crypto-art scene for a few years and love seeing how people express their thoughts of Bitcoin/Crypto through art. Art is such an amazing expression and coupled with cryptocurrencies amazing crypto-art is created.

BC: Which are the most impressive achievements of the “crypto-art movement” (so to speak) and why do you think they are so important?

AR: I think it is them spreading such powerful messages visually and so simply. Money makes the world go around and crypto-art can help disrupt our current monetary systems. A simple QR is a payment address – even that can be turned into art.

BC: In which regions of the world do you see crypto-art growing the fastest and why do you think this is?

AR: I think it will grow fastest in parts of the world where governments are moving against cryptocurrencies. Art expresses thoughts worldwide, in some of the most deprived countries and hostile situations.

What is Bitcoin in your Opinion?

BC: If you had to pick one category to place bitcoin in, which would you choose from the following and why?

AR: Technological innovation. Being the first to solve the double spending problem Bitcoin has produced an amazing scene for everyone to build on.

BC: Are you involved with any other cryptocurrency projects? Which? Why do you like them?

AR: Only my own cryptocurrency projects through CryptoBates Group. I am part of some teams in the cryptocurrency world but not on a high level, mainly just providing input here and there and hosting servers and websites.