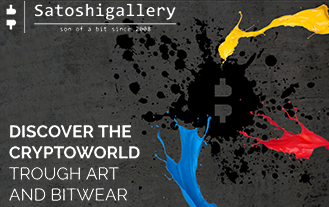 This week I had the opportunity to interview Valentina Picozzi of Satoshi Gallery. Valentina is a very talented artist, with a clever perspective on bitcoin and blockchain technology, which she conveys through her art. The aim of her work and Satoshi Gallery is to bridge the gap between the highly technical aspect of bitcoin and blockchain, and the common user through art. Here is the interview with the artist behind the alpaca mask, together with a few samples of her pieces:

When did you start producing bitcoin/blockchain inspired art?

Valentina Picozzi: I started in 2015 with the first little piece “son of a bit” on a layer of one cent coins. Then in May 2016 I founded Satoshi Gallery. The idea behind the name is to have a gallery about the world Satoshi Nakamoto created and make bitcoin cooler from an iconographic point of view, in order to reach more people and help them embrace bitcoin values.

What made you gravitate towards this space?

Valentina Picozzi: I got into bitcoin in 2012, I started reading about it, I went to conferences and talked to people in order to better understand the concept and the philosophy behind it….and I fell in love with it!

I really wanted to be part of the bitcoin community and help the cause somehow, but I am not a coder, nor a miner. I have an artistic mind rather than a mathematical one, that’s why I decided to use art.

How do you think that art can help the bitcoin/blockchain cause?

Valentina Picozzi: Art has always been used to describe historical revolutions and thanks to Satoshi Nakamoto we are in the middle of a technological one. Bitcoin must be viewed from a different perspective. Art can be used to spark people’s curiosity, open their mind and help them approach it [bitcoin/blockchain techology] in an easier way, that’s why behind each painting there’s a story about the crypto world or related to it.

I do think images are a really powerful tool when you want to transfer a concept.

Where do you see your art going in an era of multiple blockchain projects?

Valentina Picozzi: I do think we will use blockchain data to establish provenance of artwork. Today the documentation related to the provenance and movements of a piece of art is fragile. Artists, owners and galleries will all be sharing information to trace the journey of artwork on blockchain related applications.

What do you think about private corporations using blockchain technology (gotta say this question was inspired by your Santander bank piece and your Net Neutrality + Visa + MasterCard piece)?

Valentina Picozzi: In order to talk about bitcoin through art, I felt obliged to analize from an artistic point of view also the situation that brought Satoshi to the creation of bitcoin back in 2008: banks, the financial crisis and the currency inflation.

Bitcoin is the technology behind the blockchain, not the opposite. Having all these banks and corporations talking about how innovative they are, introducing “the blockchain technology” in their systems only shows the fact they don’t get the point. It’s something that just made me look at banks as old dinosaurs…that’s why I transformed the Santander logo into a Black Swan.

The other painting you are asking me about talks about 2011 when Wikileaks faced shut down from payment processors like Visa, Mastercard, Paypal that prevented them from receiving donations. This has been an abuse of Net Neutrality, which is a principle that internet service providers and governments should treat all data on the internet the same, not discriminating or charging differentially by user, content, site, platform, application, type of attached equipment, or mode of communication.

What kind of advice would you give to young artists trying to make it in the bitcoin/blockcahin niche?

Valentina Picozzi: DON’T USE the bitcoin logo! Bitcoin is much more than an upper case B with two lines passing through it. Talk about the anecdotes, the philosophy, the innovation behind it. Give a meaning to the painting, tell a story through art. Art is not something passive, art talks. Create your own style, use shapes and patterns rather than a logo.

Which piece of art is your favorite and why?

The first one is a painting with my favorite Satoshi Nakamoto’s quote “If you don’t believe it or don’t get it, I don’t have the time to try to convince you I am sorry.” – which is one of my favorite quotes of all times because it really matches with my attitude and way of life.

The second one is “The pizza was good”. I made that painting in order to celebrate the first bitcoin transaction ever made on May 22nd 2010 when Laszlo Hanyecz offered Jercos 10.000 bitcoins for two pizzas. It’s a very pop art painting – I love pop art – and there’s a big orange circle around it that reminds the bitcoin. I like the fact that even if the guy spent a huge amount of money (if related to the current bitcoin price!), he didn’t show any regrets and when he was asked about the purchase he only replied that he enjoyed the pizza. Furthermore…I am Italian, I do love pizza!