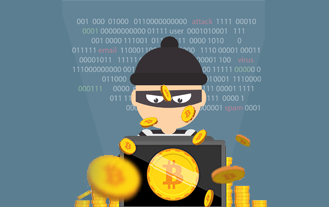 Ever since its inception, media outlets have linked bitcoin with cyber-crime. In some of those infamous cases, hackers stole bitcoin from other individuals, companies and organizations. These bitcoin hackers carried out their heists in a variety of ways. In some cases, like the DAO attack, the lines between stealing and taking, legal and illegal activity, blurred completely. In other cases, the lines are much clearer, but above all, some have not gotten the attention they deserved. Here are the top 5 cases in which bitcoin hackers stole a fortune that you might have never heard about.

These bitcoin hackers operated under the clout of the North Korean regime. This means that it is difficult – if not impossible – to know who they are. It is safe to assume in their case that the government sanctioned this heist. It would be nearly impossible to gain access to the internet in North Korea without the regime’s blessing. South Korean estimates show that there could be as many as 17,000 hackers in the north, under the orders of as many as 5,000 supervisors. With that in mind it is also possible to provide a plausible explanation for why this heist happened. North Korea is under heavy international sanctions and is always looking for foreign currency. Kim Jong Un’s regime can use those coins to purchase and smuggle essential goods into the country.

The next heist on the list is the infamous Bitfinex hack that took place a little under a year ago. Bitcoin hackers targeted this Hong Kong-based cryptocurrency exchange in 2016, stealing 119,756 BTC, which was around $65 million USD at the time. The price of bitcoin immediately plummeted. This heist probably had the deepest impact on bitcoin prices since the Mt Gox attack. In USD terms, it was the second biggest attack against a cryptocurrency exchange after Mt Gox. What is even more disturbing is that the attack showed cryptocurrency exchanges might have not learned the Mt Gox lesson. Keeping those coins in cold storage is the only way anyone can keep them away from bitcoin hackers.

Jered Kenna, an early bitcoin adopter, is another individual who apparently didn’t learn the lesson. His coins were definitely not in cold storage on August 11th, 2016, when he discovered a bitcoin hacker stole millions from him. Referring to this heist, Kenna declared “I’m an early bitcoin adopter. I don’t think you have to say anything else.” Bitcoin hackers stole his coins through his phone, shutting Kenna out of as many as 30 different platforms and services, including his PayPal and Windows accounts. The hackers switched Kenna’s cellphone provider to carry out their crime.

The next case involves bitcoin hackers recurring to a ransomware attack to get some coins. The Romantik Seehotel Jaegerwirt hotel in Austria was their target. On January 2017, bitcoin hackers got into the hotel systems and locked about 180 guests in their rooms. They did so through a weakness in the digital key card system that the hotel had. The hackers demanded €1,500 in bitcoin to free the hostages. Hotel management agreed and paid the ransom, only to find that the bitcoin hackers left a backdoor in the system which they attempted to exploit again. This time the hotel reacted and patched its systems before the hackers managed to carry out another attack.

This case is somewhat weird because of the low amount that the hackers demanded. In fact, many claim that it was a fake ransomware attack. Companies often engage in ethical hacking to test their systems, but the fact that there was a ransom makes this activity an unlikely explanation. Maybe it was a publicity stunt, or maybe these bitcoin hackers were just testing their abilities. No one can know for sure, but it definitely is a strange case.

Another company in the sights of bitcoin hackers this year was Apple. Holding 200 million Apple accounts captive, bitcoin hackers demanded $75,000 worth of bitcoin in ransom. Once again, the amount is suspicious. Why go through all the trouble of carrying out such an attack to demand such a relatively small amount of money?

The events that transpired after the attack, make this heist even weirder than the previous one. The “Turkish Crime Family” who claimed responsibility for this hack, set an April 7th deadline for Apple to pay. The deadline passed, and it is still unclear whether Apple paid or not. The bitcoin hackers posted a link showing the transaction did take place and is recorded on blockchain.info. However, experts sustain that Apple did not make a payment and that the hackers’ claim is false.

The Lesson: Use Cold Storage!

Ransomware attacks are becoming more popular, bringing bitcoin hackers to a different level. Stealing coins off careless bitcoin users might become increasingly difficult if these users store their bitcoin cold. Therefore, bitcoin hackers will have to change their game and go after data that they can steal to ask for a ransom on it later. This is probably the only way to get people’s bitcoin out of cold storage. In any case, all bitcoin users, whether they are individuals, companies or organizations, must understand that they should keep their bitcoin safe in cold storage, and as much critical data as they can, offline.