MMA icons will be testing their might and jumping into the cage on March 19th at UFC London. 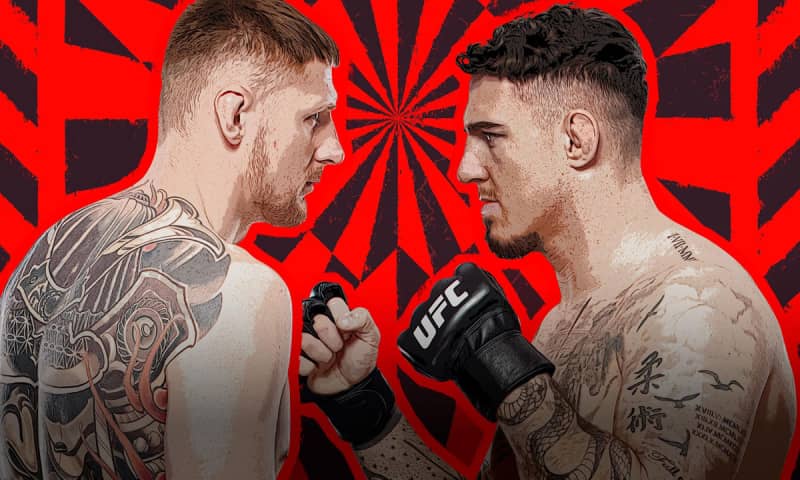 In the great words of the legendary Bruce Buffer, “IT’S TIME!” If you’re even the slightest bit of an MMA or UFC fan you would know all about that feeling in the build-up to an amazing card! Huge icons in the game will be testing their might and jumping into the cage on Saturday March 19th, and UFC fans around the world are waiting in awe! Dan Hooker, Tom Aspinall, Paddy Pimblett, Ilia Topiria, and so many more, these events are exactly what UFC and MMA fans around the world yearn for, and BitcoinChaser is here to give a bit of a heads up.

Our team is surrounded by online casinos day in and day out, whether it be reviewing casinos, casino news, or anything in between, this team is on it. Due to this, we like to believe we have a fair bit of knowledge when it comes to online sports betting, as many casinos have a sportsbook option integrated into their site. The BitcoinChaser team is taking this knowledge to hand you our top picks of UFC London! These top picks will be based on only the main card, so without further or due.

In the first fight of the UFC London main card, Ilia Topuria and Jai Herbert go head to head in a Lightweight bout. This will be Illia’s first-ever bout in the Lightweight Division as he moves up a weight class for the first time in his career.

Our pick: We believe this fight will not go to Decision and Ilia will either win this one on the ground via a submission or ground strikes. There is a chance of Ilia taking a KO victory of Jai Herbert but in our eyes, this is less likely!

In this thrilling women’s Flyweight bout Molly McCann takes on Luana Carolina. We believe this one is going to be a fireworks display. Molly McCann is heading into the cage with her home crowd behind her, and this is likely to get the adrenaline pumping, which means there’s a high chance Molly Mccann doesn’t take a step back and walks Launa down the entire fight.

While Molly McCann is known to absorb up to 5 significant strikes per minute, Luana is known to be a counter-striker, so this one is going to be exciting! Molly McCann (-140) vs. Luana Carolina (+120).

Our pick: Molly McCann is walking into this one as the betting favorite. We think this one is going to be close. We predict this bout will go to Decision with Luana being the victor through a hard-fought performance.

This is an interesting one. Gunnar Nelson will face Takashi Sato in a Welterweight bout. Gunnar Nelson has won 2 of his last 5 fights and is currently coming off of a two-year layoff. These factors are definitely something to consider going into the fight; however, also take into account the level of opponents Gunnar has faced in his previous 5 fights.

Names Like Gilbert Burns and Leon Edwards, those losses don’t seem as detrimental here. Gunnar Nelson is heading into this bout as the betting favorite, Gunnar Nelson (-510) vs. Takashi Sato (+375).

Our pick: We’re backing Gunnar Nelson heading into this one, we think this fight won’t reach the Decision and Gunnar will likely be declared victor through a Submission victory.

Possibly the biggest fight in terms of media hype on the main card event is the jaw-dropping bout between Paddy Pimblett and Kazuya Vargas in a Lightweight bout.

Paddy Pimblett is a rising star in the UFC and has managed to gain an immense but of hype behind his name within the rather short period of his time at the UFC. Paddy is entering the fight as a heavy betting favorite, in fact the second biggest betting favorite on the card, Paddy Pimblett (-550) vs. Kazula Vargas (+400). Paddy “The Baddy” is coming off an impressive KO victory from his last appearance in the UFC octagon.

Our pick: We think this fight could go both ways, but this fight will certainly not go to Decision. We see Paddy either securing the victory via a KO, Submission, or TKO via ground strikes!

This card is simply the gift that keeps on giving, here we see the acclaimed Dan Hooker face Arnold Allen in the Featherweight Division. This fight is truly a nail-biter, these fighters are entering the bout at almost even betting odds, meaning this fight could be truly competitive or over in seconds!

Dan Hooker is jumping down a weight class to face Aronlod Allen at Featherweight, as opposed to his usual appearances in the Lightweight Division. Dan Hooker has faced the absolute best of the best in all of MMA, Arnold Allen is also no joke coming into the fight with victories over all his past 5 opponents, and as the betting favorite, Arnold Allen (-115) VS. Dan Hooker (+105).

Our pick: We believe this one could go both ways and is truly the epitome of a close bet! However BitcoinChaser is backing Dan “The Hangman” Hooker on this one. We think with the level of competition he has faced accompanied with his veteran status experience, Hooker is going to be able to pull the victory out of the bag. We see this fight either ending as Dan hooker being the victor through a Decision victory or a KO victory in the latter rounds.

It’s time for the main event of the evening! We all know the excitement one feels when Bruce Buffer finally introduces the last bout of the evening. Another truly nail-biting event here we see Tom Aspinall face Alexander Volkov in a Heavyweight Division bout. Tom Aspinall is hailing from the very same gym that Paddy Pimblett fights out of, and is another prospect in the UFC that has received a great amount of hype during a short run in the UFC.

Tom Aspinall is walking into the UFC octagon as the betting favorite, but not by much. Tom Aspinall is currently coming off of victories over 5 of his last opponents. This is a large step up in competition for Tom Aspinall, Alexander Volkov is somewhat of a legend in the game and has faced some of the best fighters the UFC Heavyweight has produced.

Bet on UFC London with Crypto

There are a number of great betting options available to bet on UFC London with Bitcoin and crypto. We have listed a few of the most popular sports betting sites below. All have bets on UFC London available. And if you want to take a deeper dive into the world of Bitcoin and sports then have a read of our guide to the best bitcoin sports betting sites.

Stake are the official betting partner of the UFC and do a great job MMA it on their sports betting site.
Visit

You can bet on all the big fights at UFC London plus loads of other MMA matchups at Cloudbet.
Visit

All the UFC London matchups are available at MELBet sportsbook.
Visit

BitBook sportsbook has 38 UFC matches coming up, including the big fights from UFC London.
Visit

Thunderpick have the top match-ups at UFC London under their Martial Arts section.
Visit

NitrogenSports is an anonymous sportsbook and casino that has the big lineups from UFC London under their ‘Fight Sports’ section.
Visit

BetUS covers everything and that includes UFC London.
Visit

This card is absolutely stacked to the brim with thrilling fights. Whether you’re planning on placing bets or simply enjoy a card of this magnitude we are sure that a large portion of popcorn and beer will be spilled as some outrageously thrilling moments transpire at UFC London. We hope our top picks can shed some light on a few of the truly obscure picks that the UFC has presented us in this card. If you have placed a bet with knowledge learned here, don’t forget to mention BitcoinChaser on social media!