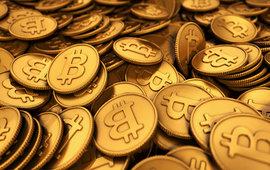 After we had a major recent development in Bitcoin’s path towards mainstream acceptance via the New York banks, this past week saw that process pushed a little further. The newest Bitcoin financial news also happens to be coming out of New York, as the NYSE has officially launched a Bitcoin price index (NYXBT).

There are already plenty of sites for Bitcoin trading, including Bitcoin binary options, but this is the first time that Bitcoin has been listed on the New York Stock Exchange as an available index for traders.

This step is a step in the right direction – that is if you believe that the right direction is widespread Bitcoin acceptance as opposed to a major takeover by the cryptocurrency. Will Bitcoin ever replace the dollar? Who knows, but probably not. Will the ability to trade it on the NYSE make it a more stable and accepted form of currency that will remove the “internet drug money” label? Yes.

Considering its stature in the Bitcoin community, Coinbase will be the feeder for transaction data used in the index – especially after the Wall Street stock exchange took part in Coinbase’s recent $75 million funding round.

With Bitcoin already receiving an official banking license in the State of New York, the addition of the price index to the NYSE will really vault Bitcoin into the financial mainstream. In fact, the NYSE is well aware of Bitcoin’s growing popularity and is looking to capitalize on it.

According to NYSE Group President Thomas Fairley, “Bitcoin values are quickly becoming a data point that our customers want to follow as they consider transacting, trading or investing with this emerging asset class.”

The NYSE also reported how Coinbase isn’t the only Bitcoin price feeder and it will look into more sites in the near future. With the recent growth of the Bitcoin community, and the spillover into the financial world, it was only a matter of time until Bitcoin became a major part of daily trading. Now, the next step is expanding outside of New York and pushing Bitcoin further and further.