Millions of people use Bitcoin but not nearly enough of them understand the basic tenets that Satoshi explained on his white paper. 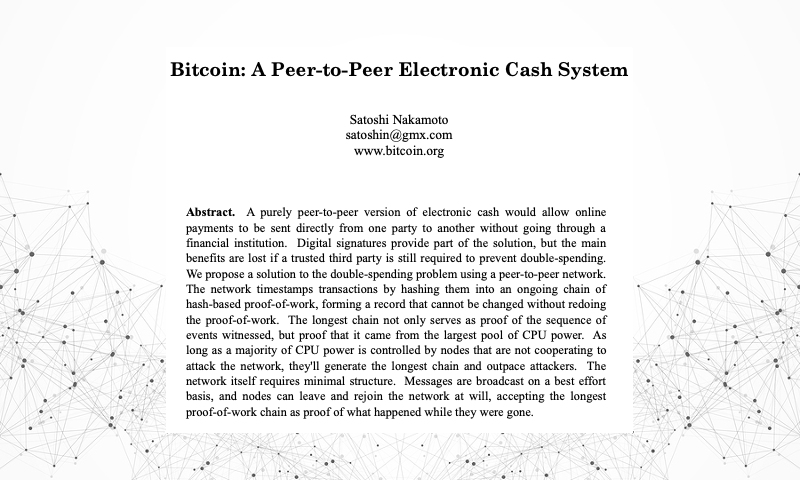 Bitcoin is a “purely peer-to-peer version of electronic cash” that aims to enable direct payments between parties without the need for financial institutions. Or at least that is what Satoshi Nakamoto intended it to be when he published the Bitcoin white paper on October 31st, 2008.

Since then Bitcoin’s use cases have morphed and multiplied. Some say that subsequent forks and BIPs allowed Bitcoin to deviate from its initial purpose. But without getting into the political debate (about what Bitcoin is, what it should be and what it was intended to be) let’s take a look at the most important points that Satoshi highlighted in his white paper. These are the pillars of the cryptocurrency revolution.

Let’s Not Get Technical Here!

Let’s highlight the crucial aspects of the white paper without getting technical. The key aspects are:

The biggest challenge to an electronic form of P2P cash is that anyone can copy a coin, or spend the same coin multiple times. This is the first challenge that Satoshi solved by allowing the system to record transaction in a public ledger, which needs a consensus mechanism to make a change. Time stamping the transactions allows everyone to understand when the money was spent, who had it and whom it went to.

The network timestamps transactions by hashing them into an ongoing chain of hash-based proof-of-work that stores transactions in blocks. Each subsequent block has a reference to the previous one and so forth. This forms a record that cannot be changed without redoing the proof-of-work.

Proof-of-Work, or PoW, is the consensus algorithm in Bitcoin’s Blockchain. This algorithm is used to confirm transactions and release new blocks into the chain. With PoW, miners compete against each other to hash a block, get the reward and then record transactions in that block for a fee.

The decentralized ledger allows everyone to verify where the money is at any given point in time.

For a decentralized network to work, multiple independent nodes must run the same software and communicate with each other. The rules of the system must apply equally to all those nodes, and all the nodes must conform to the rules.

With users checking each new block against the consensus on their own, there is no need to trust central authority for transaction validation. This means there is no central authority to seize anyone’s coins or block-specific types of transactions. Some argue that this is the aspect of Bitcoin which makes it most valuable, as one person or institution acts as an authority with too much power.

A shared set of rules and trust less transactions on a decentralized and distributed network, is not enough to make the system work. There is a crucial economic aspect to deal with as well. That is, monetary policy, or how many coins will be in the system.

Due to the lack of a central authority, there is no one to impose any monetary policy in a traditional sense; there is no central bank that controls the money supply. Therefore, the network must include a certain number of coins and rules to release them based on an algorithm. Bitcoin has a limited supply of 21 million coins. Once mined, no one can create anymore. It also has a system of halving rewards to regulate the release of new coins into the system as time passes.

Miners are the ones responsible for time stamping Bitcoin transactions and recording transactions on a block. To get a block to record transactions in, miners use hardware and a lot of energy to find the hash of the next block in the chain and add it.

They must get rewarded for the work and the energy they expend. Therefore, each block has a reward in it. These rewards halve, making mining less rewarding in Bitcoin terms as time passes. This mechanism also regulates Bitcoin supply.

Nodes on the other hand, could be related to mining but they don’t have to be. Most people could run a full node on their own computers. These nodes run Bitcoin’s software and do the job of relaying transactions, while checking the blockchain to make sure the transactions are legitimate.

The more nodes there are in the network, it is more difficult to take the network down as a whole.

Key Differences Between Nodes and Miners

Miners need constant access to nodes to pick up new transaction data and to find the preceding block’s hash. Miners, in addition to mining, can also set up their own nodes and almost every miner has a local node set up. Nevertheless, miners by themselves have no political power over the network. They only have economic power.

Decision making on Bitcoin’s blockchain is completely based on the power that each node has to vote within the system. Node consensus balances the economic power that miners have.

From just the white paper itself, it does appear that miners and nodes are conflated. At no point in the white paper is any distinction made between the two, nor is there specific mention of the term “Miner”. Thus, it appears that Satoshi envisioned them as being the same entity. But anyone can run a node without mining.

The last important feature of the Bitcoin network is that transactions on it are immutable. To change the ledger, consensus amongst nodes must emerge. It is also difficult to walk back a timestamp on a transaction that a miner already recorded on a block, once that block has another few blocks in front of it on the chain.

Both miners and nodes act in concert to enable the Bitcoin network and are the pillars on which Bitcoin rests. Together, they create a system immune to external manipulation, tampering or censorship and fulfil the promise of Bitcoin.

Changes Beyond the Scope of Bitcoin’s White Paper

These are the key aspects in Satoshi Nakamoto’s White Paper. This is how Bitcoin works, without getting too technical. The landscape nowadays might seem a little different. For example, Satoshi didn’t explicitly state that ASICs could one day take over the mining industry and squeeze most independent miners out.

Nevertheless, the system he proposed on Bitcoin’s White Paper seems to be resilient enough to absorb these changes, while providing the basis for a plethora of other cryptocurrencies to develop based on similar ideas and mechanisms.

You can read the full Bitcoin white paper at Bitcoin.org