Crypto is so many things, but scary? Spooky? How’s that even possible you ask? Find out through these crypto horror stories. 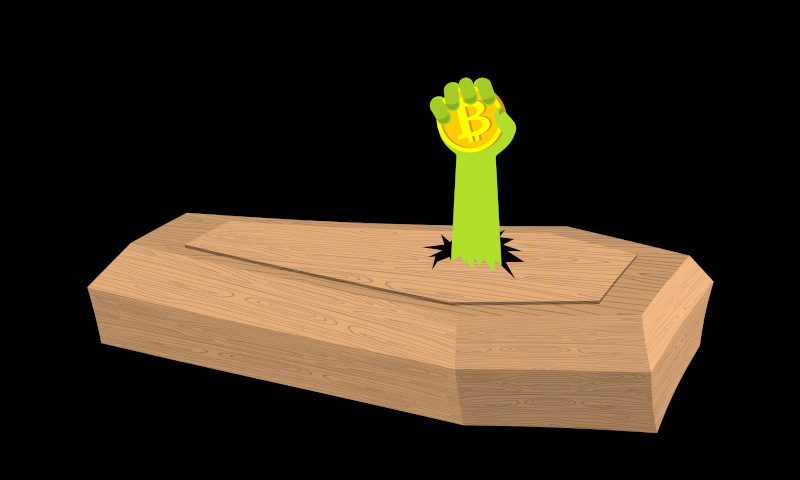 In the spirit of the current crypto recession, we have decided to compile a list of a few of the bigger crypto horror stories that have rattled the crypto community within the last ten years. For the most part, we have stuck with global tragedies, over the individual.

According to a Forbes article from January 2021, ten of the wealthiest cryptocurrency moguls lost a combined $26.9 billion from November 2021, when Bitcoin and the overall crypto market peaked in value, to July 2022 . Three of the ten are, at the time of writing, worth 50% less than in early November.

The total cryptocurrency market capitalization of all crypto was around $3 trillion on November 10 and as of July 13, 2022, it was at $883 million USD. While we won’t be crying for the billionaires who became millionaires, there are many smaller investors who lost all of their savings, or even savings into the hundreds of thousands.

On July 7th, it was reported that the North Korean hackers, known as the Lazarus Group, were able to steal $540 million USD worth of cryptocurrency from the Axie Infinity Platform through a phishing scam. Fortunately for the developers, the players remained loyal and have continued playing the game. Furthermore, the developers were able to refund the players $150 million USD, thanks to the support of its investors.

Terra (LUNA) was the name of an altcoin that was tied to TerraUSD (UST) via a seigniorage algorithmic algorithm, which was meant to be a stablecoin with a 1:1 ratio to the USD. By doing so, the UST was intended to regulate LUNA so that it too would be traded 1 UST for $1 USD worth of LUNA.

However, the problem with this was that LUNA would always recognize a UST as being valued at $1 USD, even when it was not. This means that if the UST were to fall to $0.20, for instance, users could then purchase 50 UST for $10. They could then swap their 50 UST for $50 of LUNA and then sell it in the open market for an instant 500 percent profit.

This is exactly what happened on May 13, 2022 when a whale took advantage of the drop in price of UST caused by the withdrawal of $150 million USD from the curve wormhole pool by Terraform themselves in preparation for the launch of their 4pool platform. The opportunistic whale took advantage of the sudden decrease in UST value to sell $350 million UST for USDC n Curve which resulted in an imbalance between the two of UST 85% to 3CRV (15%), according to Forbes.

This resulted in a bank run on Anchor resulting in a crash that caused a $200 billion USD decline in the overall cryptocurrency market cap in just a couple of days. The attempted solution, namely the TerraClassicUSD which was created by the Terra hard fork, hasn’t fared much better, and as on July 13 2022 each coin was valued at around $0.04 USD according to CoinMarketCap. Many people lost their life savings as a result.

The Day the Founder Died

A tail as old as crypto, and nowadays less common, is when people lose private keys to their wallets, either by accidentally throwing away their hard drive, forgetting their password, or similar. But then there was the case of QuadrigaCX, where the founder Gerald Corron passed away in December 2018 leaving no-one with the passwords to the cold-storage wallets that were on his laptop, effectively blocking over 110,000 Quadriga HODLers from ever gaining access to their crypto again.

He had intended to set up a ‘Dead Man’s Switch’ to be sent shortly after his passing but had never gotten around to it. This caused those HODLers an accumulated loss of around $200 million USD. This resulted in the company’s official declaration of bankruptcy in April 2019. Ouch.

2017 was arguably the year of ‘the rise of crypto’ which resulted in the price of BTC rising by nearly 20% from the beginning of the year to it’s all-time high of $19,783 USD in December. But then the bubble burst. It continued to decline throughout 2018 until it was down to $3,743 USD by December 2018.

While long-time HODLers who had been holding on throughout the rollercoaster ride were ok, many new investors who had bought into the meteoric rise of BTC felt the pain almost immediately, especially if they had made the mistake of buying at that crucial ATH, as within 5 days the price had already dropped to $13,832 USD.

Many people have different theories as to why this is so, with the Professor of Finance from the University of Texas, John Griffin, who specializes in fraud identification, writing a paper outlining how this was due to deliberate price manipulation by the use of Tether.

Confirmed professional scam artist, Ruja Ignatova, somehow managed to run a long-term Ponzi scheme called ‘OneCoin’ between 2014-2017 without arousing suspicion. That is until she ran off after cashing out $500 million USD of funds from the platform.

As yet, there has been no trace found of her or her family. As the crypto is now worth approximately 4 billion USD, even the FBI has taken note, and is offering a $100,000 USD reward to anyone who provides relevant information on her whereabouts.

The one positive from this crypto horror story is that is spawned a podcast, The Missing Crypto Queen. BBC presenter Jamie Bartlett recounts the tale of Ignatova’s greed and duplicity while attempting to track her down.

Related: 5 Crypto Podcasts You Should Give a Try

Although relatively minor in relation to most of the events on this list, the 2017 Ethereum hack resulted in a loss of around 153,000 ETH (Equivalent to about $32.6 million USD at the time) was significant as it was the first major hack on the Ethereum blockchain. As with most hacks, an exploitation was discovered between the Parity multi-signature wallet and that was then used to steal the ETH.

This led to the community voting to implement a hard fork to revert the blockchain to a state prior to the hack. Thus, a new blockchain called Ethereum Classic came into being with its own native coin, ETC.

This was a choice; the users voted to decide which branch of the fork to go with. Those who went with ETC would then have ETC equal to the amount of ETH that they had prior to the fork. Unfortunately for those who decided to go with Ethereum Classic over Ethereum, the platform never took off in the same way that Ethereum did. For instance, as of July 14, 2022, ETH was worth about $1,174 USD, while ETC was worth about $14.60 USD.

Unfortunately, to date only around 200,000 BTC has been recovered.

As this was the first major hack in crypto history, many still remember it. This is especially true since it has been slow in unfolding. For instance, the Russian hacker accused of laundering the BTC was only arrested in 2017, and it was only in July 2022 that it was announced that some of the cryptocurrency that had been frozen in Mt. Gox’s accounts would be released back to its creditors.

In this thread, Redditors share the biggest losses that they have suffered either from poor judgement or bad timing. From a user who lost $290,000 from a Pixelated Whale investment to those who missed selling their crypto in the November 2011 ATH, it makes for a tragic read and cautionary tale to future crypto traders.